An ad-free, premium service for cord cutters to have access to their favorite [adult swim] shows and games anytime, anywhere. Customized the way they want it. Cartoon Network’s [adult swim] app currently lets users watch any of their historic programming and, if they’re cable customers, keep up with the latest episodes of their favorite shows. I, along with two other team members, was tasked with redefining the business model and developing a streaming app solution for cord cutters (users without a cable account) to have access to [adult swim] content, ad-free, via a premium service. After defining the scope of the project and assessing the brand, we began our process by conducting competitive analysis and user research so that we could identify best practices and pitfalls and begin to understand the mindset of the [adult swim] viewer. I developed our competitive analysis framework and defined our research strategy which included talking to stakeholders, searching social media and forums for user feedback, administering an online survey, and conducting one-on-one interviews with users. From the research, I learned about our users’ expectations, pain points, and behaviors via questioning and observation. Based on the findings from our user research, I was able to develop two distinct personas and devise a solution for our users. During our interviews with users, two types of viewers stood out as the most prominent. As such, our solution was centered around meeting the needs and expectations of these users through an app which would feature customization, exclusive content, and games offered as an ad-free service across multiple devices. In developing the solution, our process included ideation and sketching to create wireframes and ultimately high fidelity comps of the [adult swim] streaming app. Starting with sketching, my goal was to get ideas down on paper in order to think through possible solutions and visualize the potential flow and layout of the app. We then moved on to wireframing where we sought to fine tune the layout and elements of the app. During this stage, I collaborated with my team members and focused on incorporating best practices learned during the competitive analysis and insights gained from the user research in order to prioritize the features and functions of the app. We defined the information architecture via a sitemap. I also visualized the interaction of the app by creating a user journey and flow for Bruce, our Former Fan persona.

I designed the visual interface and built phone and tablet prototypes in order to begin usability testing of the app with the high fidelity comps. I created task scenarios and conducted two rounds of testing from which I iterated upon the design based on the findings. Two of the key outcomes from our first round of testing were the addition of progressive onboarding to better acquaint the user with the app’s features and long tap interaction on the show page image (for adding content to home screen). 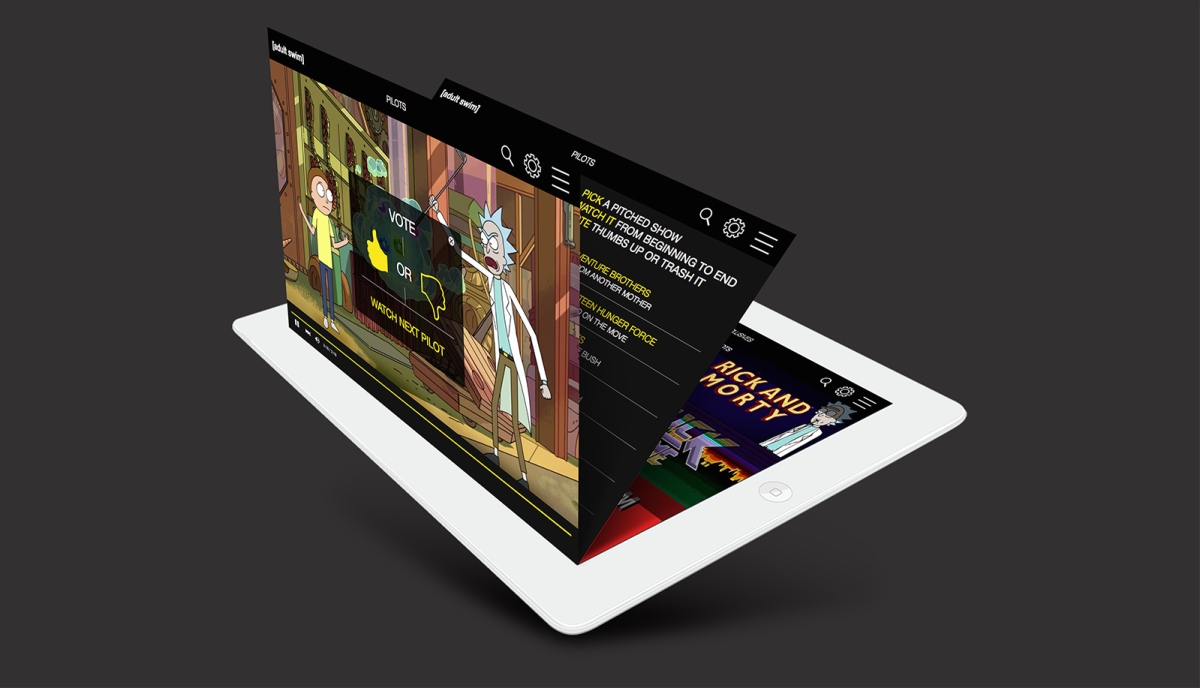 [adult swim] differentiates itself by delivering the unexpected and capitalizing on shock value. As such, future considerations for the app include incorporating more [adult swim] ‘language’ to more closely fit branding. This could include thinking more outside of the box for icons and interactions within the app. For example, instead of just using thumbs up and thumbs down icons for the content voting feature, I would like to explore using more unexpected icons pairs such as pony or poop. Hey, it is [adult swim]! I would also like to do further testing on the gaming and voting features of the app.

Take a look and click through the phone and tablet prototypes below.

VIEW MORE OF MY WORK